After a series of great wins in August-September, 14-year-old Sarah Jalli now finds herself rated over 2500 in the Paddle Palace Ohio League here at the Samson Dubina Table Tennis Academy.  So, what is her secret to becoming more and more successful?  Well, there are a number of secrets that I would like to share here.  I have detailed out these secrets with eight simple keys…

Think about it, your opponent is already injured, and now you need some fancy tactics to beat him???

Come on!  Give him a break!

No way!  Absolutely not!  Never! 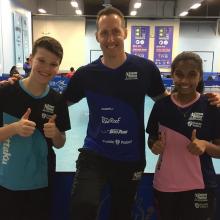 Learn about the 4 stages of a training cycle


Many professional players peak for certain tournaments each year.  By having a systematic training cycle, these players can perform well at the important tournaments.  There are usually four parts to the six-month season:  Pre-season, in-season, the peak tournament, and post-season.  In this article, I'm going to briefly outline how you can learn to peak for that one important tournament six months from now.


One year at the US National Team Trials, I was leading 3-2 against ***Mark Hazinski and leading 9-3 in the 6th game.  After a series of aggressive mistakes by me, he closed the gap 9-8.  I simply pushed and blocked the next 2 points to win the match 11-8 in the 6th.  Walking off the court, my coach said, “I would rather have you lose the match than to win it like that.”  I replied, “The goal was to win.” 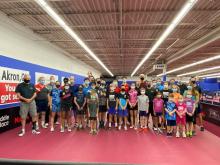 3 Weeks at the Ohio Mega Camps
By: Frank Yin

Check out the ACTION from the Ohio Mega Camps

Thanks!
I would like to thank the players who participated the Ohio Mega Camps this summer as well as the coaches and practice partners who helped everyone so much during the 3 weeks...  Chance Friend, Larry Hodges, Kai Zhang, Bruno Ventura, Sarah Hazinski, Mark Hendricks, AJ Carney, Maria Bogoeva, Derek May, Seth Pech, Anwen Harris, and Parth Nagpure. 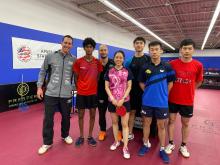 This camp is open to both kids and adults of all ages and all levels! Each player will be working on level appropriate drills to get the best camp experience!

Am I describing you?


This article is based on a quote from my friend Don Hamilton.  He said, “Every time I step up to the table, I’m able to learn something or improve something during the course of the match.”

To book your private lesson with Samson or Chance, call or text Samson at 330-949-9230 or e-mail tt@SamsonDubina.com