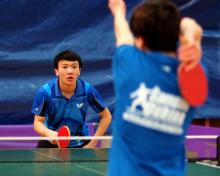 Learn how to develop your A game!

Example #1
Bob is a 600-rated recreational player who plays at the table tennis club once per week.  He knows that his footwork isn’t very good and so he must develop a backhand to go along with his powerful forehand.  During the club matches, he can’t really perfect it much.  At home, he plays with his recreational relatives and beats them all 11-0 or 11-1 using his powerful forehand.  What advice should I give to Bob if he wants to develop a good backhand?
Bob, use your backhand in practice matches, even against your recreational relatives.  It’s ok to win those practice matches 11-8 or 11-9.  If you are working toward developing a strong backhand each day, then it is easier to use your backhand in the critical club matches.

Example #2
Tom is a 2300-rated, strong 2-wing looper who plays at the local table tennis club everyday for 3 hours.  He knows that his long serves are good and he uses them.  Not only is Tom good, but he is 400 points higher than any other player in the state of Nebraska.  Tom doesn’t have any defense and he doesn’t need to (so he thinks).  As Tom serves long at the club, his opponents cringe and merely push the ball up for him every time.  As Tom finishes them off with powerful forehand and backhand loops, everyone thinks that he is unstoppable.  What do you think will happen if Tom plays a 2400 player at the US Nationals?
Tom will serve long and his 2400 opponent will attack strong.  Taken back by such a strong attack against him, he will be forced to block or counterloop.  Tom tries to adjust by serving short.  However, his short serves are developed and usually go high and long.  Tom is frustrated because things are turning out how they always go at the club.
Tom should have used his short serves at the club and developed clear strategies against 2300+ level players.  Playing club matches isn’t just about winning 11-0 every game.  During club matches, you should be able to think about your tournament game against higher players and properly prepare accordingly.

Example #3
Suzi is a 2100 chopper who has excellent footwork, spinny chops, but inconsistent loops.  Because she is one of the top players in the club, she only attacks when she feels that she needs to.  When she plays against the lower-rated players at the club, she wins the majority of the matches 3-0 with her steady chops.  When she occasionally plays against a higher player and realizes that she is losing, then she considers attacking.  However, many times her attack isn’t very consistent and she loses due to her mistakes.  After years of practicing, her chops become better and better and better and better; yet, her attacks remain inconsistent.  What advice should I give to Suzi if she wants to develop a strong attack that consistently works well in matches?  In order to fully develop her attack, she needs to stop thinking about merely winning.  Winning is nice, but game development is more important.  Against those lower players at the club, YES she can win chopping, but that doesn’t do much for developing her attack.  Against those higher players at the club, she feels inconsistent on her attack because she hasn’t fully developed it.  Advice:  Suzi should use her strong attacks no matter who she is playing because she knows that it is a critical element to the overall progression that she needs.

Example #4
Fred is a 2100-rated blocker and looper who wants to learn how to stay close and be aggressive and someday reach 2500 level.  When playing against the under 2000 level players at the club, Fred wins the matches merely with lobbing and fishing 15 feet back from the table.  Against the over 2000 level players, Fred wants to stay close but often finds himself away from the table.  What should Fred do?  Fred should bring out his best game against all opponents, stay close, be aggressive, and train as if he were 2500 now.   Reaching 2500 level starts with training at a 2500 level.