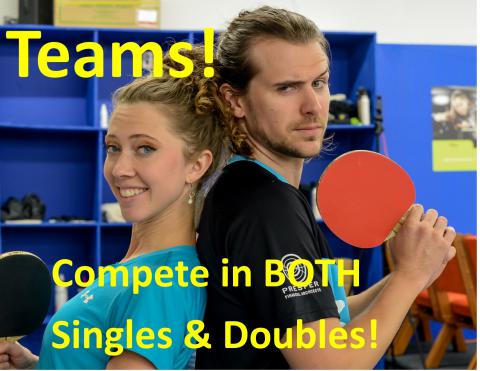 Intro
Here at the Samson Dubina Table Tennis Academy, we are thrilled to announce the new Paddle Palace TEAM League.  Each night, you will be playing both singles and doubles against other teams and having the opportunity to take home some amazing prizes. Table tennis is an individual sport.  However, the Samson Dubina Table Tennis Academy is dedicated to bringing players of all ages together to workout, compete, socialize, and make friends in the new team league where you will play BOTH singles and doubles.

Team
A team consists of two players of similar level.  Each week, you will play with a different partner in your division.  Here is how it works…Division 1 is the top 8 players.  Division 2 is the next 8 players.  The pattern repeats until all players are in a group.  Names are drawn and the top 4 get placed randomly with the bottom 4 players.  For example, if division 3 has 8 players that are rated 1550, 1500, 1490, 1480, 1400, 1310, 1250, 1250, then the 1550, 1500, 1490, and 1480 players get randomly placed with the other 4 players.  Each player gets 6 matches for the night - three in singles and three in doubles.  You sign up as an individual.  You don't sign up with a partner.  Each week, your partner changes based on a random draw in your division with the other players.  If you go undefeated in singles, you are guaranteed to move up a division the next week.  Format is: Match 1- Doubles, Match 2 - Highest Rated on Team 1 vs. Highest Rated on Team 2, Match 3 – Lowest Rated on Team 1 vs. Lowest Rated on Team 2.  Once these 3 matches are finished, that completes 1 team match.  Each team will play 3 team matches for the evening.  Regardless of the wins, all 3 matches need to be played and count toward total score.  Doubles matches are best 2/3 games.  Singles matches are best 3/5 games.  If the match is 2-2, then the 5th game starts at 8-8.  When your team plays against another team, you will play 1 doubles match and 1 singles match.  Only the singles match counts towards your club rating. Both your singles wins and your doubles wins and your partners singles wins count toward your total wins for the $600 league finals at the end of the season.